Richard Lide is a business coach and entrepreneur who grew up in a small town in North Carolina. He attended North Carolina Agricultural and Technical State University in Greensboro, where he majored in business, and graduated in 1995.

“I have started three multimillion dollar companies from scratch,” he says. “I have helped over twenty people start their own businesses and have success.”

He shares many of the personality traits common to virtually all successful entrepreneurs. He is, first and foremost, full of determination. He is unafraid to try new ideas and take risks, and understands failure is part of the process. After one of his businesses went under, all of his friends walked away from him and he was forced to rebuild. He keeps in mind the words of Richard Branson, who said that it is how you deal with failure that tests you, and that failure is one of the secrets to success. Once you understand that, you learn to use those setbacks as learning experiences that teach you more than you would ever learn in a classroom.

Richard Lide is also extremely adaptable and has an excellent sense of money management. He knows better than most that starting a business is a lot of work, calling for long hours and a lot of personal sacrifice. But with the challenge comes the potential for great reward, and that is enough to make it all worthwhile.

For all of his business success, Richard Lide says the most important things in his life are his family; his greatest pleasures are his children and his beloved wife.

Be a yardstick of quality. Some people aren’t used to an environment where excellence is expected. 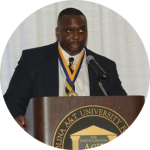 Richard Lide is a business coach and mentor, and a serial entrepreneur based in Greensboro, North Carolina. He has built several multi-million-dollar businesses from the ground up, and at present, is in the process of building a new one.

As a successful entrepreneur himself, he knows the value of having a coach guide you through the process of launching a business of your own. He shares his knowledge and experiences with his entrepreneurial clients.

Experience, he says, is by far the most important thing he has to share. He has already accomplished what others aspire to. He does more than talk the talk; he can walk the walk. He has built successful businesses and had others that failed. Having paid his dues in real-world situations, he has the insights that can greatly improve your chances of business success by avoiding what, to the trained eye, are predictable pitfalls.

With these qualifications, Richard Lide shares his expertise with:

From the Executive Summary to a market analysis, he can show you how to write the most effective business plan.

Starting a business is, by definition, a risk. There are ways to minimize risk, like avoiding Merchant Cash Advances, which usually come with higher interest rates and don’t build business credit.

Too many entrepreneurs partner with another without thoroughly vetting the person’s background.

Richard Lide has built several successful multi-million-dollar businesses from scratch, in the course of his career. He has also had to rebuild after one of his businesses went under.

He is a believer in the old saying that when one door closes, another one opens. Losing a promising business can be a devastating blow, but it is also an opportunity: one that enables you to emerge more experienced and more prepared.

He has learned a simple truth he didn’t learn at North Carolina A&T: business is business, and one of the keys to success is setting yourself apart from the crowd. Virtually every business market is already over-saturated; you find success by distinguishing yourself from the competition. He is wise enough now to not expect overnight success; he is in it for the long haul. You persevere while your competition gives up.

Richard Lide is now in the process of building a huge business, and getting himself back on top. His part informs his future. As a business coach, he is not a self-help guru who has never been a millionaire; he has actually done it. He is in the process of writing a book and publishing free information on YouTube and other Internet outlets.

Richard helped me start my business from the scratch. He gave me all the tools I needed to get off to a great start.

Richard helped me buy a distressed business for less than what it would have cost me to start new.

Richard Lide gained a deep appreciation for statistics when he studied business at North Carolina Agricultural and Technical State University. Informed by relevant statistics, he is able to make sound business decisions. There is no such thing as a sure bet in business, but the right stats can take a lot of the guesswork out […]

Richard Lide gained a deep appreciation for statistics when he studied business at North Carolina Agricultural and Technical State University. Informed by relevant statistics, he is able to make sound…

The Next Big Thing in Business

Richard Lide is like most successful entrepreneurs: always on the lookout for the Next Big Thing, and wondering how to give it the spin that will make it unique. Experience has taught him that rumblings about the newest hot opportunities are almost always wrong. And therein lies the rub, for it is the elusive exception […]

Richard Lide is like most successful entrepreneurs: always on the lookout for the Next Big Thing, and wondering how to give it the spin that will make it unique. Experience…